As an Amazon Associate I earn from qualifying purchases.

I’m sure most of us would love to have a complete Ninja Coffee Bar on our counter. Unless you’ve got a much larger kitchen than I do, however, that’s just not going to fly.

I barely have room on my counter for a coffee machine and there’s not way my non-coffee-loving wife would stand with me relegating the toaster to a cupboard.

Which leaves me with one alternative if I want a latte at home, a handheld milk frother.

I’ve tried several milk frothers in the past and, in general, they’re underwhelming. They typically either lack the power or longevity to get the stiff foam peaks that I’m after.

The current gem I have is a different story. I’ve been using a Kuissential SlickFroth 2.0 for the past couple of months and today I’m going to tell you why you should probably have one too!

I don’t consider myself overly demanding. Especially when I’m shopping for the type of kitchen tool that can usually be had for less than $20. But, seeing as I don’t like non-working garbage in my drawers, I did have a few things in a milk frother that I just had to have: 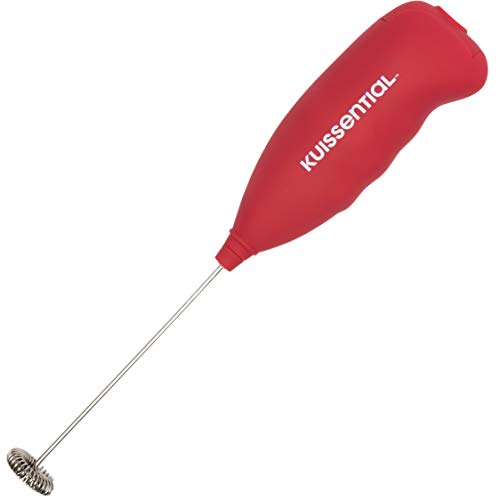 And that’s it! All-in-all I just wanted something that would do the job I bought it to do without breaking the bank.

Now it goes without saying that the Kuissential SlickFroth 2.0 is just one choice. A handheld milk frother is a great pick for someone who knows how to make espresso already and is looking for something to help make milk frothy. But there are a bunch that met my criteria.

So, in the end, I relied on owner reviews (and sorting the options Price: Low to High) to make my choice.

This handheld frothing wand is a great introduction to making at-home cappuccinos or lattes.

Espresso drinks that I used to reserve for the café, can be made by yours truly without getting out of my PJs. I meant I don’t get out of my PJs to run to Caribou Coffee either but that’s a different problem.

The one thing I will say up front is that you’ll need to have a few AA batteries on hand as they are necessary and aren’t included.

The Kuissential SlickFroth 2.0 is designed to be ergonomically compatible. It’s not like I’ve ever experienced pain from holding onto a milk frother before but it was still nice to hold.

I doubt I’ll ever be able to make Instagram-able latte art with the foam from this tool but it is long-lasting and works up to its maximum speed quickly.

Believe it or not, I really don’t have much more to say about it! It does its job, it doesn’t have any glaring issues, and it’s priced extremely well!

Find It On Amazon

Luckily for me, the Kuissential SlickFroth is super easy to clean. Otherwise, it probably wouldn’t happen.

Work up as much mess as you want and make as many specialty drinks as you need to with this tool, and you will find that cleanup is always quick and easy.

For this coffee tool, you only need to get some hot and soapy water. Turn on the SlickFroth in the water, and then rinse it. In other words, make a latter out of soapy water.

Compared to most mug-frothing options, the SlickFroth is leaps easier to clean and care for.

While you do need to buy batteries, the process to keep this tool pristine could not be easier. 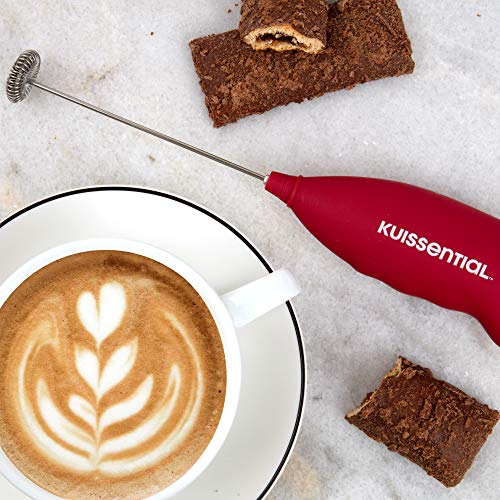 It has never been easier to make a latte at home than it is today. For this method, all you need is finely ground espresso beans, milk, a French Press, and something to froth with. Follow these instructions if you are choosing to use the Kuissential SlickFroth 2.0.

After your grounds have steeped for about four minutes, press the plunger halfway down. Raise it slightly, and then press it the rest of the way down. Doing this allows your grounds to be exposed to the pressure typically necessary to make great espresso.

Finally, use the Kuissential SlickFroth 2.0 to froth heated milk. Bring the wand to the top of your milk to create foam. For the last step, pour your frothy, warm milk into your cup of espresso.

While the frother did the job I bought it for, there are a few things that I would like to see in version 3.0. I might even pay a few extra dollars if these options were included.

That’s the limit of my gripes! Many people find that they would prefer a rechargeable version but that won’t be on my wishlist anytime soon.

So if you have limited space and need some milk foam, get the Kuissential SlickFroth 2.0.

It’s easy to use and will make the job super fast.

If the SlickFrother doesn’t float your boat for one reason or another, however, my next choice was the Milk Frother from PowerLix. It is a bit more expensive but is also battery-powered and comes with a stand.

Whichever one you choose I hope that my review of the Kuissential SlickFroth 2.0 Frother was helpful and that you’ll be enjoying a latte in no time.

How To Detox From Caffeine (Quickest & Least Painful Method)

Life Without Caffeine: Is It Actually Better? (1 Year Clean)

The 3 Best Barista Schools in the Country (Overall Value)

Is All Instant Coffee The Same? Which Type Is Best?

nutritionally.org is a participant in the Amazon Services LLC Associates Program, an affiliate advertising program designed to provide a means for sites to earn advertising fees by advertising and linking to Amazon.com